Children make you laugh…they come out with the most unexpected statements which can turn an ordinary day into something special. Lego, in my experience also has that power. It seems to be able to transcend gender and age to connect (sorry about that!) with players. The reaction to today’s session in computing was quite overwhelming. Understandably once I reflected on the nature of the task.

1) Lego Comic Builder: As part of the computing curriculum students are supposed to experience the relationship between images and text, how this affects the audience and message being portrayed. I am presently working with Year 5’s & 6’s on a design project centred around William Morris and my Y1 & Y2’s are brushing up on their mouse control skills. (not flash enabled for tablets)


The design aspect of the William Morris project is focused on giving the students the opportunity to design a contemporary piece influenced by Morris, but squarely pinpointing graphical and design principles. So perspective and angles is an important element. The comic builder allows the student to play with scale and placement of objects without having to be an expert draftsman. This may be opposite to the critical skill of drawing and appreciation of the fine motor skills that sketching can bring. But, in this case, I want the students to be freed from the pressure of not being a very good drawer, and allow them to experiment without worrying about the limitations that they put on themselves or would ordinarily prevent them from taking part. Everybody’s work looks professional. I can see that certain individuals in the class are genuinely proud of the work they have produced. Their image of themselves as designers has been transformed by the inclusion of the design package. Added to this the bonus of Literacy skills of captioning, punctuation of speech, condensing phrases to tell a story with limited characters meant the task was rich with learning. The children were bursting with pride in their capabilities. So much so that a few parents have asked for the link! 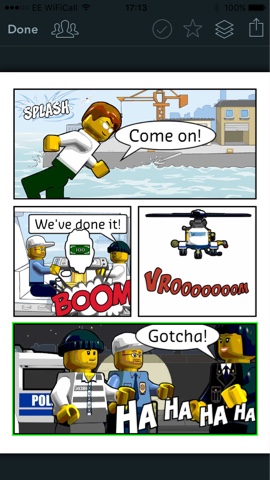 This wasn’t the only option open to the students, pen and paper have their place for those confident enough to show their understanding in this format. 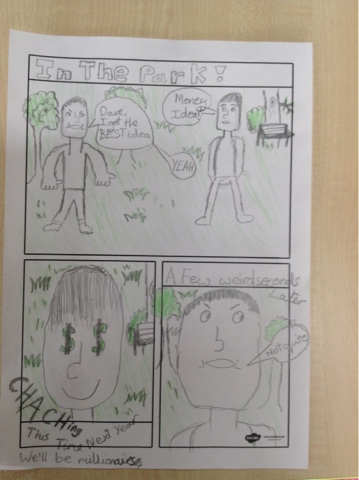 The year 1’s could not wait to start the dragging and dropping the Lego characters into their page. Yes the template was chosen randomly, and yes their finished article wasn’t a coherent comic book story but the focused and genuine engagement with the task was total. Their iPad timers counting down their allowed 15mins at the desktop, only served to focus their minds to the task. The menu of choices were exciting and the finished product genuinely reflected their ability to control the computer using drop down menus, sliding buttons and scroll bars. The year Two’s then paired with a year 1 peer and gave them a quick walk through tutorial before leaving them to their own devices…well at least for the ten minutes of the iPad timers silent countdown.  If the first practice is anything to go by, these children could be budding cartoonists, journalists, graphic novelists…Hey that gives me an idea!