,Technology should be simple and intuitive to use. In the classroom situation technology is best utilised when the technology seamlessly integrates into the task or learning style. This sounds as if I am preaching but today there was ample evidence that when a school reaches a stage in which the technology used neither stands out or demands additional attention; it just simply works. This is the proof that schools crave. Seamless integration is often cited as a schools’ visionary aim.
The apps we use also need to be intuitive. That’s why I continue to champion Apple. Their iWorks suite of apps that are free with the iPad just work, the development of these super apps, which are created by a fanatical army of dedicated, super intelligent & creative individuals is quite beyond my comprehension. I can however revel and appreciate the difference that it makes to my students  in the classes I teach. I applaud their pursuit of excellence, their insistence that it needs to be as good as it can be and that the experience of the learner should be almost ethereal. Gossamer apps.
Today I had the misfortune of using an app which was the polar opposite of the Apple apps. My year 1 students were asked to extend their independence whilst writing stories. The hope was that their burgeoning vocabulary and knowledge about whales would set this exciting prospect in motion. 2 create a story was the app made by 2 simple. Well known in the profiling assessment arena, this app was unnecessarily tricky. It neither delivered a good experience for either learner or more importantly enabled the students to use the app as a foil for their creativity. It tried to simplify the process but only succeeded in limiting the possibilities for the students. Like the antonyms featured in the SATs It only served to be restrictive and ultimately frustrating.
So – what did I use successfully in the classroom today?
Year 3&4 – Numbers, Showbie, Book Creator and the built in camera features of the iPad. Shared on Trilby Tv to ensure the rest of the school could see the progress being achieved. 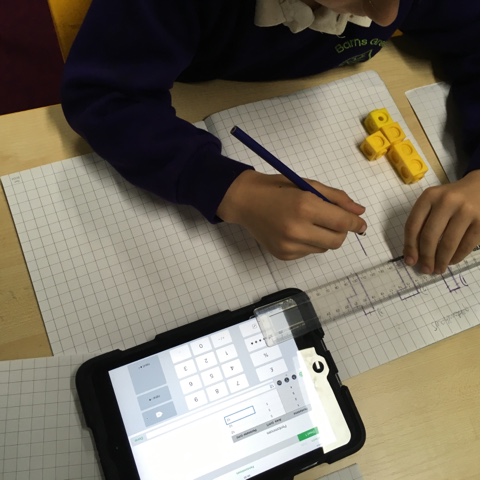 Any maths teacher knows that pentominoes are an excellent way to introduce and consolidate area and perimeter. The varied resources easily accessible for the students – modelled templates that become individualised and editable once opened in the appropriate app. The differentiated tasks required the student to work in synchronicity with the traditional equipment of multi link, pencil and ruler but to incorporate the using a spreadsheet and accenting their work with screen shots to reinforce the connections made. The maths skills were uppermost, the technology merely enabled the students thought processes to flow naturally between the demands of the tasks. As the challenges got “hotter” the use of the devices changed and adapted to the needs of the learner. Whilst the students were working the photos that I took were quickly added in to the Quik app which I them showed as the plenary of the lesson. This was also uploaded to Trilby Tv to allow the rest of the school to share our success. It was received by a spontaneous round of applause, not for the animation but that the class recognised that they had really moved their learn on to another level. Magical.