Why was today so demanding as the teacher? Didn’t I plan efficiently enough, were the challenges pitched incorrectly or was it a case that the students were so integral to the learning that they required support that needed to adapt and morph itself into more effective mentoring? Although exhausted, by the intensity of the day…on reflection I’d like to capture the buzz, energy and urgency to learn that was evident in the classroom today. I almost wish I was the calibre of teacher that could provide experiences like today’s, every day.

‘The Worst Children in the World’  was how the day kicked off, reading the short story about Brian Wong – the boy who never got anything wrong, newly published by David Walliams. This was the stimulus for the cold writing task. The difference today is I used the iPad as a visualiser, projecting live images of the text as I read onto the class screen. Walliams is a master at using alliteration and exentuating words for effect, and this had to been seen to get the full experience. 30 year 5&6 gripped from the mouth-watering first word until the last, which happened to be a grave stone. The children were enthralled by the words but included in the discovery of the tale. This echoed in the first drafts of the cold writing task that followed – no additional need for stimulus as the students had experienced by using all their senses the modelled story.

One child, who recently joined the school had no prior experience of boxing up a story plan so he and I took the time to plan a story using Adobe Spark (formerly voice). This was transformation for this student allowed him to use his skills in an adapted format in order to be as successful. He joined the class with limited ability to read and almost non existent writing skills – decoding is unknown to him and at 10 years old he’s finding school an alien environment. But today his success was obvious as his work was spoken into the iPad and after discussion – he was able to converted his ideas into a beginning, middle and end of a worthwhile story. The task took 40 mins which is the longest that he has stayed focuses and willing to participate. At the end of the day he remarked, ” it can’t be home time yet” normally the day drags and lasts for so long… This is a celebratory moment, further reinforced by the star of the week certificate for good work and that he can see his work on the screens around the school having uploaded his video to Trilby Tv – then icing on the cake. 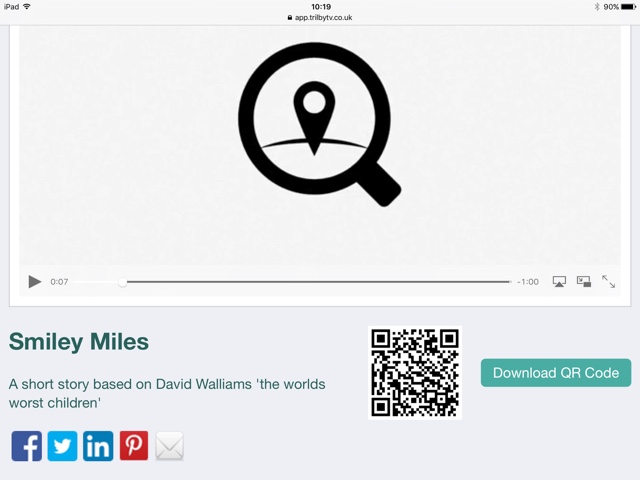 The children are competing to create and code a game – and the stakes are getting higher as the deadline looms. Yesterday the leaders of the groups had an injection of advanced scratch coaching and today was their opportunity to share their newly acquired knowledge with their own groups, mentoring and experiencing life from the other side of the fence. Being in the position of teacher is a privilege and full of different demands – patience & magnanimity being brought to the fore. 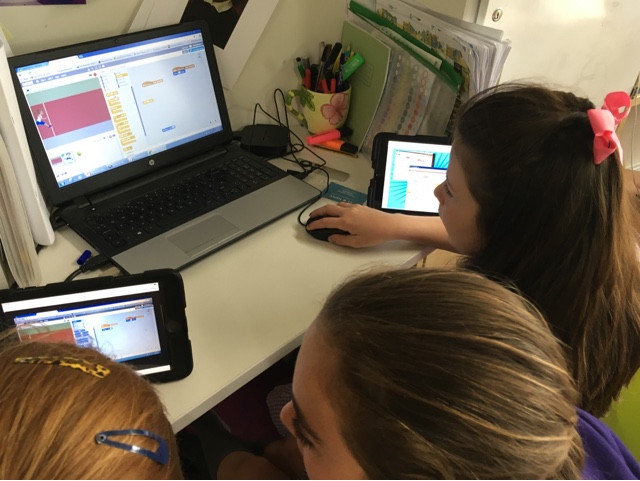 Code was researched and reviewed on iPad before adding to the PC version. Group work being the most important element to making progress.

During science Book Creator was the vehicle for the evaluation and experiment planning stage of the Light project. Why do bubbles appear to be made of different colours? The students used the stimulus image from Showbie to mark up with captions highlighting the key known facts in addition sound feature was used to verbalise complicated reasoning and explanations of how light that travels in straight line can be affected by interference to create colour. 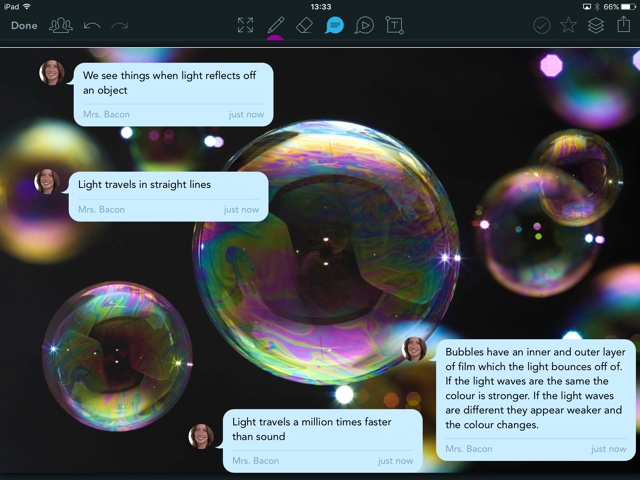 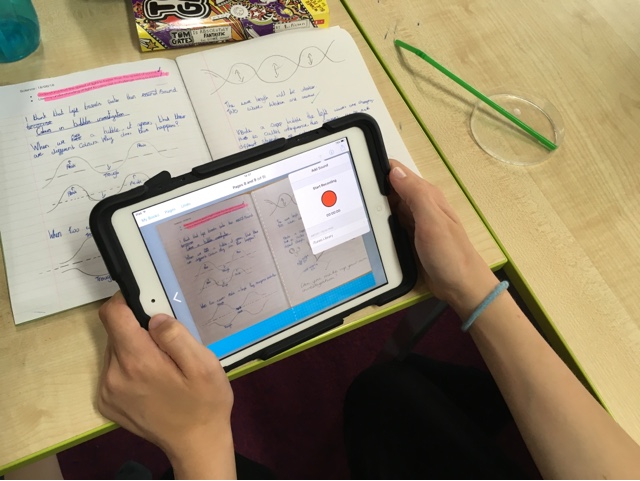 The students were the epitome of independent learners, usintilising the iPad to enhance their understanding and reinforce known facts and experiences. Teaching is the best job in the world.