Endless curiosity and enthusiasm makes working with pre prep children an absolute joy. Having walked into school this morning to work with individual children on their specific targets I bumped into the reception teacher who wasn’t feeling her best; full of cold as many teachers are at this time of year. We had a quick conversation about what teaching meant to us as individuals and we both agreed that to be able to provide learning experiences that are rich in creativity allowing individuals to access the curriculum was a shared belief of good practice. It’s what makes teaching rewarding. She recounted to me her previous day at school when she had gone home feeling that she had done a really good job and the children had learnt in an optimal way and all of the gods of planning and circumstance and mood aligned to make the previous afternoon magical. I felt privileged to have had that conversation, as teachers we often dwell on the negative and the “could do better” comments and don’t always listen and acknowledge to ourselves let alone others, when we do a good job.

So it was an absolute joy that today I could supplement her exceptional planning and provision for her reception children by adding in a digital twist. The school is at the very beginning of their journey with mobile technology and some of the well-known apps to time users en met with renewed excitement and anticipation. The reception children have to rehearse and verbal verbally tell a story, using a story mountain template with the start middle and end. The scaffolding that have been put into place meant that the two children I worked with had a very good grounding on what was expected of them and the skills that thy were rehearsing. So armed with an iPad and a newly loaded copy of the puppet pals app (Directors Cut) we began to make an animation of their individual stories, capturing the emerging vocabulary whilst providing the children with the skills to digitally manipulate their work. Whilst fulfilling i digital aspects of the computing curriculum at the same time.
One little girl sat in front of me with a basket containing a plastic Polar Bear, a lamb, a frog some hay and various assortment of sticks and cones. After discussing her story mountain template and talking through the story with this quickly got down to adding each of the animals as an actor on PuppetPals HD. I showed my pupil just once how to cut out the outline of the actor and with the enthusiasm that I wish I could bottle, she was away and had completed, unaided, all the other ‘actors’ in the space of a few minutes. The next hurdle was to set up each of the elements of the story as individual backdrop.  So I demonstrated how to take the first photo of the frog in the hay! My protégé then followed this up with a wooden tree and pinecone then finally some twigs that super worm was to rescue the lamb from.
The fantastical and wacky story that was so real in this little girl’s head came alive with her commentary as together we changed the backdrops and manipulated the actors on the iPad. The resulting 30second video was then air-played & shared with the rest of the class on their big screen, the audiences eyes were like saucers filled with admiration for the little girls skill as a story teller. The class were captivated by the video, especially hearing the voice of their friend and seeing the plastic animals come to life, it was all too much for some of them! (teaching assistant too..) The teacher was impressed because she could instantly see that the small task she had planned has been transformed into quite a different activity. The redefinition of the task was completed because of the ability to use technology effectively. Inspired by her pupils, she was brave enough to attempt to try duplicate the activity with the remaining year one pupils that same afternoon. Secure in the knowledge that she could call upon the little girl to guide and support her through this newfound discovery. Child focused and child led learning, pure magic. 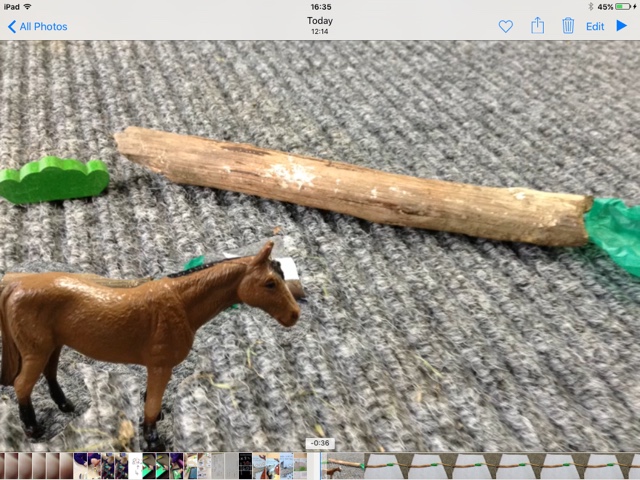