Hopscotch in the classroom 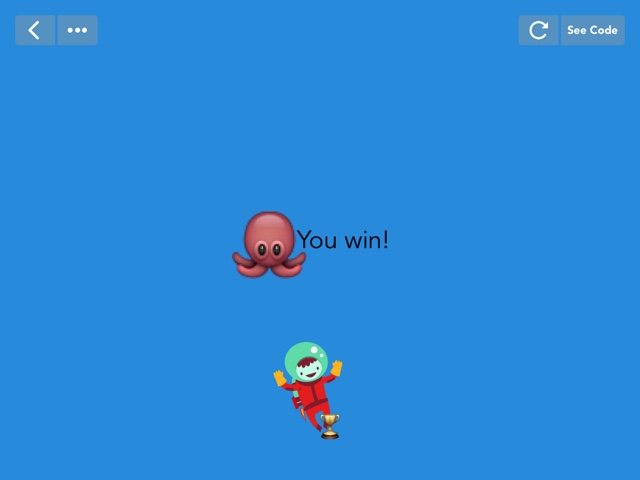 Today I was very excited to going to the classroom as I had refreshed my skills over the weekend on hopscotch. For those of you unfamiliar with Hopscotch it is a creative coding app to help students  build and create their own games. It uses coding blocks and allows the children to manipulate a game and quickly produce a very realistic and sophisticated end product.

So having practised and made my own game at the weekend (whilst watching England play Wales in the rugby World Cup…the best way to learn!) I was raring to try out all that I had mastered with the class. I did however find myself writing down every step so that my visual brain connected to my memory.  This would prove to be invaluable…
What I have used in the classroom today?
The mere mention of the word Hopscotch sent the children into a excited and focused mind set.
The task was simple follow a tutorial and to build a treasure dive game. The pupils were told that their ultimate aim was to make a game based around the Shang Dynasty, so it links with their current topic as well as giving them a reason to perfect and practice their skills.
Hopscotch provides very clear and precise instructions on how to make individual types of games on a screencast which allows free and independent learning. Continuing the rugby theme I like and the practising of individual elements like lineouts and scrims  to encourage the pupils to take the time to focus and refine their building capabilities. It was inevitable that some of the pupils in the class felt that this was way below their capacity. In dealing with the wide range of abilities, Hopscotch easily allows you to layer the difficulty and the precision required of the coding blocks.
Hopscotch — Make your own games. Coding made waaaaay easier. by Hopscotch Technologies
https://appsto.re/gb/f2cYK.i
Note to self – ensure a backup of notes and simple instructions in case the Wi-Fi is unable to support 32 individual children working on iPads and wanting to stream from the app!
Even with this unfortunate setback and being blessed with patient and freethinking children, the class were able to support each other by collaborating and sharing their skill set. This meant that at the end  of the session The majority of the students had made a prototype game. Publishing soon!